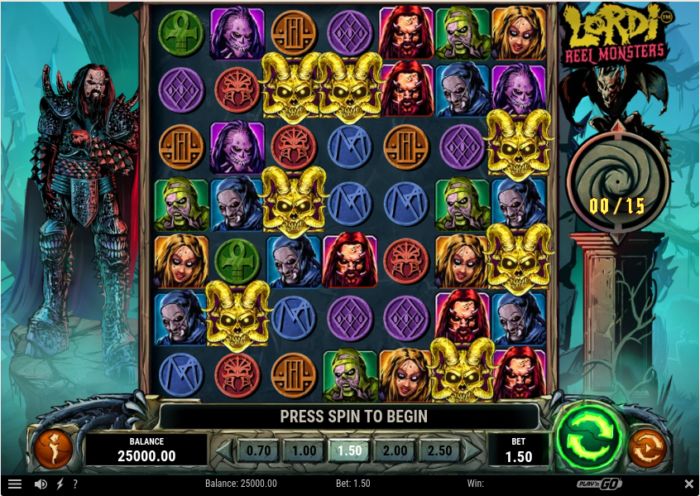 The overall design of the game is based on the heavy metal band Lordi and is heavily influenced by the monster and horror theme. The slot game is set in a background of a misty graveyard and the band members feature as the symbols on the grid. The premium symbols of the band include Mr Lordi, Mana, Hella, Amen, and Hiisi and will pay up to 100 to 250 times your stake if you get a fifteen plus cluster.

The winning symbols will be collected in the Monster Charger that is on the right-hand side of the reel, and every winning symbol will charge the meter by one. You can unleash a monster modifier by collecting fifteen symbols and you get a bonus round if you manage to fill the meter with forty collected symbols. You will be awarded the monster modifier when the cascading sequence ends, and a specific modifier for a band member will be chosen randomly by the game. 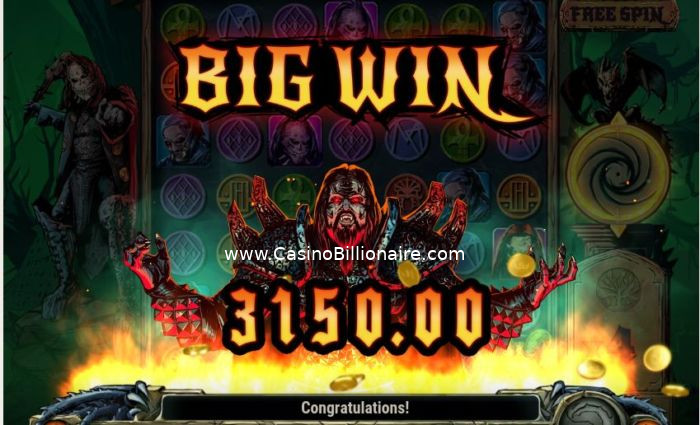 My big win while testing the game

The Lordi Reel Monsters slot game is of medium volatility and has a 96.2% RTP (return to player) set by default. That gives players a decent chance to win big money at the game. It seems that fans of Mr. Lordi will definitely love the fact that they get to enjoy the band's music and get a chance to win money at the same time. It doesn't guarantee big wins that often, but the payout is decent and you get the chance to groove to Lordi's music while playing this branded slot machine game online. That's one of the big plus points of the game and part of the reason people will choose to play it.

If you're looking for a big payday then Lordi Reel Monsters isn't the slot game for you. It's meant to provide you with hours of fun and give you the chance to win decent money. The payout isn't the best one you can get in the slot game genre but it is still decent enough to attract attention.

The cascading win mechanics of the Lordi Reel Monsters game ensure that you get a decent chance of winning big money. The clusters need to have five matching symbols that land in different positions and are removed or replaced with other symbols from above. The horned glowing skulls are the wild symbols, while the five characters are the high paying symbols in the game. They are Mr. Lordi, Hella, Amen, Hiisi, and Mana.

The clusters hold the key to unlocking the features of this slot game. Each winning symbol will count towards one charge in the Monster charger, and that has two levels of its own. A monster will be released when there are fifteen charges collected, and you will get a free spin when forty charges have been collected by the Monster Charger. 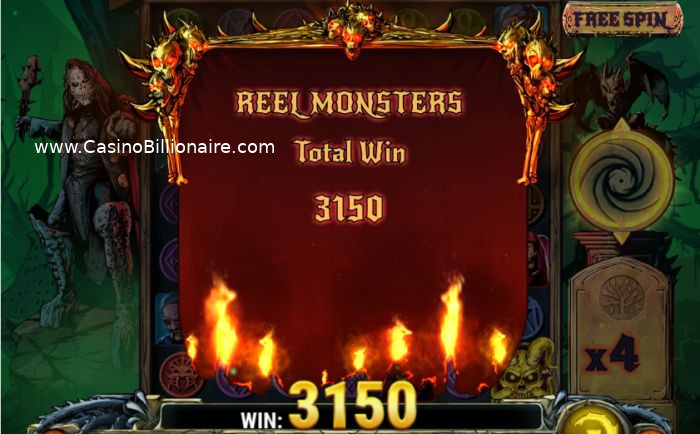 You need to fill all the 15 positions of the monster charger to activate this feature. The game will randomly pick one of the monsters that will have different extra features to enhance your gameplay.

Players need 40 charges to get 1 free spin triggered. There are 2 different features that can be active during the free spin:

Better hate than ever: Wild Multiplier and 3 monsters guaranteed

The outstanding performance of the heavy metal band Lordi certainly attracted plenty of fans to this Finnish metal band. These days heavy metal style slot games are in demand and that is something that Play N'GO has started to capitalize on. They have created a decent slot game as Lordi Reel Monsters guarantees hours of fun and some amazing metal music by the band.

The only criticism you could label towards the slot game is that it follows a basic pattern and only offers one free spin when you win big on the cascades. There isn't much to complain about the graphics of the game, which are stunning and follow the horror theme of the Lordi heavy metal band. You will find that playing the game is easy and winning some decent money is something you will easily achieve over here.

The Lordi Reel Monsters slot game is for everyone and even if you're not a fan of the rock band, you will definitely enjoy playing the slot game. It's slightly different and ensures that you're not stuck playing the same old video slots that are out there today. It may not be as volatile or rewarding as a slot game, but it is one of the best-looking slot games out there and captures the attitude of the band to perfection.

Can I play Lordi Reel Monsters slot game for free with no deposit required?

Yes, there are some online casinos that allows you to play this game on demo mode with no registration and no deposit needed. You can play with fun money but cannot win any cash prize.

What is the RTP on Lordi Reel Monsters slot game?

The return to player (RTP) of the game is set as 96.2 which can be classified as a medium variance video slot game. The average of video slots' RTP are 96% so the game is pretty much on a regular return configuration.

What are the betting limits on Lordi Reel Monsters slot game?

Players can bet from 0.10 to 100.00 per spin which makes this video slot also attractive for high rollers or any other gambler interested in high limit slot machine games.

Author Bio: Alex Ramos is a casino specialist that reviews online gambling sites and games. A professional blogger that dedicates its career for online casinos and online entertainment. He is graduated in Computing Science and is working in the online gambling industry since 1997.