No, you won`t get a free spins round in this classic slot machine, in form of video slots. The re-spin, though, could give you nice payouts, especially if you are lucky enough to get a good sequence of spins with Joker symbols.

If you get a sequence of 4 joker symbols, the key for a big win is on, as you trigger the Wheel of Multipliers.

If you get 4 joker symbols (during a spin OR during the re-spin feature) you will unlock the Wheel of Multipliers feature. A big wheel will open and spin to reveal which multiplier will be applied to your wins. You can get your winnings multiplied up to 10X.

A big win is imminent during this feature because the Joker symbol itself is the most rewarding symbol of the game. So, you will get a payout of 4 jokers plus the win multiplier.

At this time, you can get the possibility to reach the highest payout potential of Sticky Joker slot which is 165,000.

The symbols of the game are Joker, Star, Bar, 7, Plum, Grape, Lemon, and Cherry. The high paying symbol is the Joker than pays you 8x your wager. The "7" pays 5 times your wager and the Star and Bar 2 times. The rest of the symbols pays you 1 time your bet. 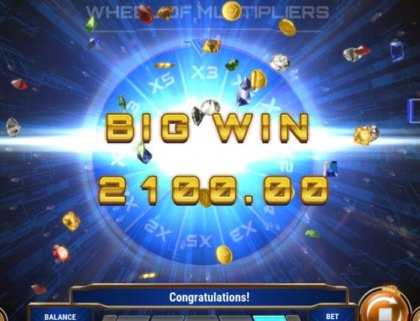 The game has an RTP of 96.74% which can be classified as a high variance slot machine game. Curiously, during my very first spin testing this game, I entered the re-spin feature and unlocked the wheel multiplier after landing 4 jokers during the feature.

So, I`ve got a big win on my first spin while testing Sticky Joker slot game.

The game is simple and easy to play, just like all classic three-reel slots. The payout potential combining the features make the whole thing way more interesting.