On this page, I will list my favorite albums from my vinyl record collection. You can read the blog posts with a review/analysis of each album and also check the videos with a few seconds of each track accessing my video channel on Bitchute. Due to the lack of time, I still have a lot of album reviews pending but I will do my best to start working o new write ups very soon. Also, this post will be updated regularly with pictures or links to my video channel where you can check more rare vinyl records from my collection.


Below you can check some videos with the rare bootleg albums. I will try to upload all my vinyl collection in this youtube playlist. UPDATE: Youtube is not allowing me to upload the vinyl albums (even playing only 5 seconds of each track) so I moved my video channel to Bitchute - click here.

I will post rare LPs of Iron Maiden, Ozzy Osbourne, Led Zeppelin, Rush, Metallica, Pink Floyd, The Beatles, Rolling Stones, and many more. I already have some videos uploaded on my Youtube channel, and occasionaly I publish something on my Twitter. Very soon, I will also start publishing my vinyl collection on my Instagram using popular hashtags like: #vinyl, #vinylrecords, #vinylgram, #vinylcollection, #recordcollector, #instavinyl, #instaspin, #vinyligclub, #vinylgram, #vinyloftheday, ... On Twitter I will use the top vinyl records hashtags which is changing too often: #vinylestimes #vinylrevival #vinylio #vinylcollector #vinyladdict #vinylcommunity #vinyljunkie, #vinylporn and more.

I am always looking for new sites and shops to know where to buy vinyl records. If you are a vinyl enthusiast and like rock music, bookmark this page to check my collection and more information about interesting shops to buy online. Most of my record collection I've got from eBay and from records shop when I am traveling.

About My Vinyl Record Collection

I've been collecting vinyl records for many years and my interest in rare bootlegs started back in 1989 when there was only one way to get vinyl records: I called the main record shops from big cities and they used to mail me the complete catalog of albums. One note: most of the shops were only selling tape recordings for the albums, so, I have to pick my favorite albums and then wait for the recording process, and then, after some weeks, I was receiving the tape mailed at home. I think all this delay and lack of vinyl bootlegs made me go in-depth into a collection of rare albums.

I do not buy everything that shows up in front of me. I am interested only in the rarest albums and some of the very expensive vinyl records. Only bootlegs because I think official albums everyone can have or everyone knows them. So, I still mining for rare vinyl albums, and here you will keep updated on my new acquisitions. There is a huge amount of work to be done as my goal is to upload all my collection. It should take some time, but I will get it done. In this meantime, check the albums listed above and visit my playlist with rare vinyl records on Bitchute.

It all started with Guns n Roses when I was in school and everyone was listening for GnR albums. I went to a small record shop to buy some vinyl and when I was diggin' the records I found some Guns N Roses albums I've never seen before. I asked the owner of the record shop about these records and he explained to me everything about bootleg records. From that day, I was entering a much better universe - without limits with a lot of rare vinyl records I could ever imagine that exists.

The albums were very expensive and he told me that I could buy the album recording in cassette tapes for a much better price. I and my friend split two Guns N Roses (November Rain and Bad Boys, Great Noize) - both double albums. We played cassette tapes at school and it was a huge success. We kept the goldmine as a secret, so only we could get the rare recordings. I remember that Guns N Roses just released their first album, and I was wondering how it could be 4 double vinyl records of the band? A new door just opened and I started to explore this universe. Years later (working and getting my own money) I bought the two records that I only had on cassette tapes.

Led Zeppelin is a band which has bootlegs the most. It is practically impossible to know all vinyl bootlegs catalog of this band. The classic old bootleg albums from Led Zeppelin are sold out in hands of serious vinyl collectors. It is difficult to get a copy of Zeep Over Europe, Alpha & Omega, Danish Pageboys, and other gems. Led Zeppelin bootleg albums are very good and because the band was constantly jamming you always get a different version of the songs. Some Zeppelin rare albums could be very expensive. Searching on Discogs you will find over 4,000 unofficial releases of the band including bootleg versions of the official albums!

That's why I call it the universe of bootleg albums. You will never know everything about the bootlegs market. Different than official album collectors, who often collect other band's albums, bootleg collectors must focus on one band to get a more valuable collection. Even focusing only on Led Zeppelin bootleg records, I believe that no one is near to get the entire bootleg albums catalog.

Again when I was on school I've got a bootleg catalog on my post mail to choose some records to buy and one of them was the Iron Maiden - Live in Manchester double vinyl record. A bootleg with Paul Di'Anno on vocals singing the classic songs from Killers and Iron Maiden title album.

After that, I found on my local vinyl shop a bootleg album called British Thunder which was pressed in Latin America. There were different versions for this bootleg with the cover on black and white or colored. The vinyl seal colored or white. I bought two different versions of British Thunder album. Years later, I saw the real "boom" of Iron Maiden vinyl bootlegs and since then, is one of the bands that I have a lot of interest in collecting.

Today I have my Iron Maiden rare vinyl records growing every month and every time I travel I try to find record shops that can have some gems to increase my collection. Also, I recently found a new bootleg album (2 LPs) which is very special for me, because I was in that gig! What a great experience! Own a bootleg record of a gig you attended is priceless. Because Iron Maiden is my favorite band I collect not only bootlegs but also limited editions released. 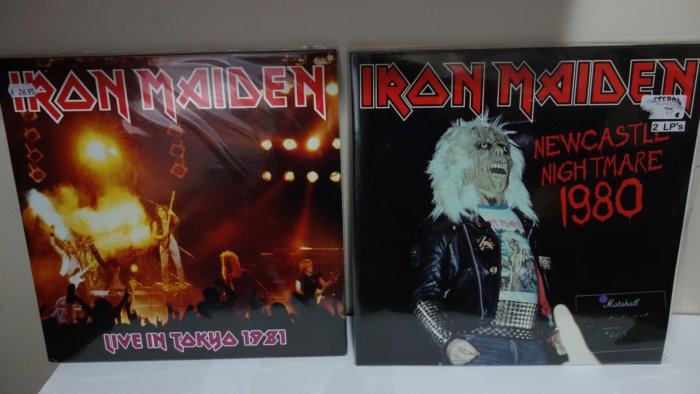 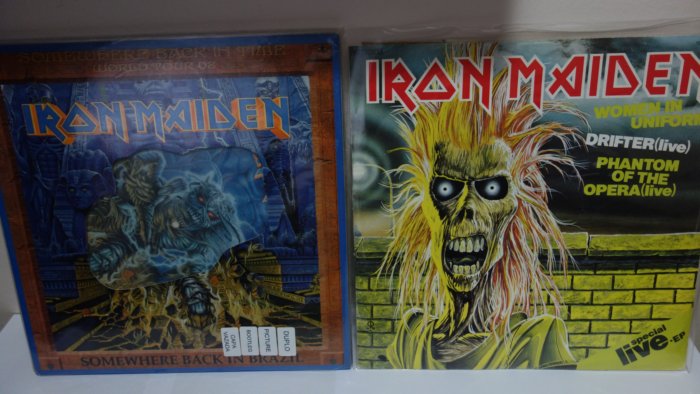 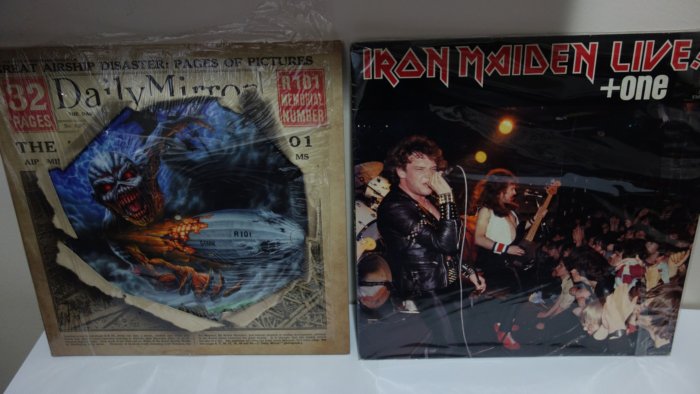 Definitely a band with a huge number of bootleg albums featuring great gigs, studio outtakes, and rehearsals. Pink Floyd collectors will have a very difficult task to find the valuable rare albums, some of them with only 50, or 100 copies worldwide. The famous Pink Floyd Live At Pompeii bootleg album is something that collectors are chasing as some presses are now very hard to find. There are so many copies and presses that there are collectors specializing on collect only Pink Floyd Live At Pompeii vinyl bootlegs. On the other hand, bootleggers know that these records will sell very easy, so, that's why we see new albums coming out on regular basis.

Sure, the rarest and expensive albums are those released in mid-1970 or around 1980. These albums are in the hands of serious collectors and it will be very hard to find a copy out there. Just like Led Zeppelin, we can find very interesting recordings of Pink Floyd and as I said before, a new universe of possibilities will open when you start to explore all rare recordings of this band. 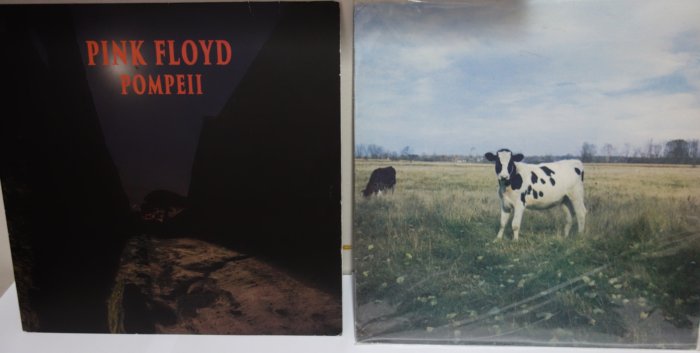 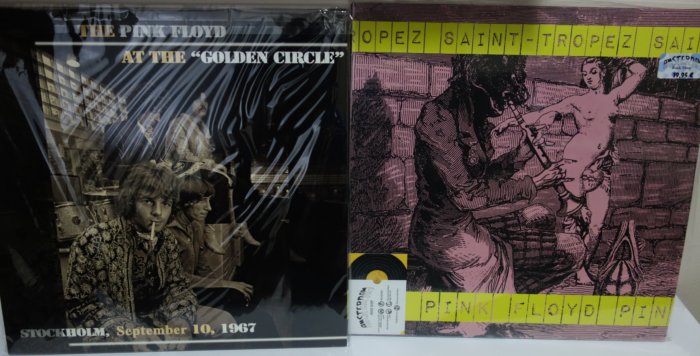 I will update this page regularly with the rarest vinyl records that you will have to pay a small fortune to buy. I am always searching the internet for rare vinyl bootleg albums and here on this page where I will post everything interesting that I find online or bought for my collection. Because of the huge amount of bands, I will focus at this moment in only bands I really like so you will find a lot of content and rare recordings for my favorite rock bands, already quoted on the first paragraph of this blog post.

I will try to add new LPs every week and also post videos on my Butchute video channel. Due to a lack of time, I also invite you (vinyl collectors) to write as a guest blogger and get all credits back. If you own a good bootleg record that you want to write here, feel free to contact me and it will be a pleasure having you as a guest blogger. As I said before, the bootleg albums universe is huge and is very difficult to cover the best records writing on my own. That's why I would like to have some guest blog posts here and make a partnership with other record collectors. Well, thank you for your visit, and don't forget to bookmark this blog post as all-new bootleg albums reviewed will be posted here. Come back regularly!