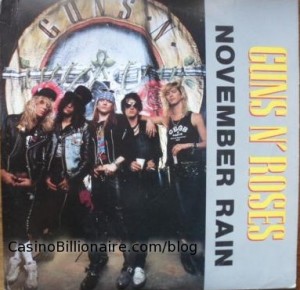 As I mentioned in the past post, when I've got this rare Guns n' Roses album, in mid of 80's there aren't too much things of Guns n' Roses available out there.. specially in Brazil where the singles and bootleg albuns was really hard to find.

This double vinyl album is called"November Rain" and it's really hard to find. In mid of 80's I've got this album on tape and last year I bought from a specialized US store.

Guns n Roses"November Rain" is a studio bootleg...  a rehearsal recorded in an Australian studio in 1985 called Waggle Records. The attractive thing in this rare Guns n Roses LP is the set list which includes a variety of unreleased tracks and some of them recorded 2 times with different versions. It's pretty cool the feeling of a Guns n Roses rehearsal in this double LP bootleg as you can hear Axel and the members talking between each track. A really gem for all Guns n Roses fans !

The sound quality of this Guns n Roses bootleg is not so good. I can rate it in 7, but the feeling of own an authentic Guns n Roses studio outtakes of 1995 is priceless. As you can see on pictures below, the cover and the LPs are both in good quality and very soon I will try to clean the vinyl to make it even better.

The double bootleg LP November Rain start with the song"Out ta get me" which has a problem on it (in the middle of the song, it goes slow and then back to the normal speed). This is the only problem found in this bootleg. I noticed this problem first time in the recorded tape (I thought it was a tape problem, but when I've got the LP I see this is a real recording problem).

Well Guns n Roses fans looking for collectibles and rare recordings... If you find this double LP in any auction or shop, go ahead and get it to you.

Want a little demo of this rare Guns n Roses LP ?? Check below :