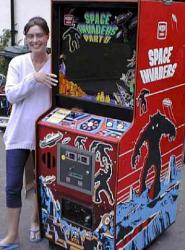 Space Invaders is a retro arcade game created by Toshihiro Nishikado in 1978 and launched by TAITO Japan.

Space Invaders is no doubt one of the most popular arcade games played by everyone from 1978 until these days. It was an overwhelming success in Japan where a huge number of Arcade places opened only to offer Space Invaders games to enthusiasts willing to toss a large amount on money and spend hours and hours playing.

There is a curiosity about the creation of Space Invaders game, which was developed using soldiers instead aliens in the first time. Then the crew though this kind of game could encourage persons to kill humans and they decided to replace the humans on game to aliens. (why do this guys will think about GTA and other modern games ??? )
Not enough, there are dozen attempts to ban the arcade game because this kind of game are"encouraging violence" in small comunities around the globe. Also, a large number of youngs was reported stealing money from this parents only to have money to play Space Invaders game on Arcade places.
All this was in early 80's and I'm sure this guys knows Space Invaders is an inoffensive game they tried to ban if compared to modern games we have today on the shelves.

Space Invaders game was launched before Pinball games and other famous games launched. It was the first arcade game licensed for ATARI video game and then in all other plataforms and video games.

Space Invaders game generated millions of dollars in revenues through the arcade game, video games licenses, merchandises, and many other things using the brand and today is easily found online to play instantly in millions of online game websites.
Pinball enthusiasts can also play the Space Invaders Pinball launched by BALLY