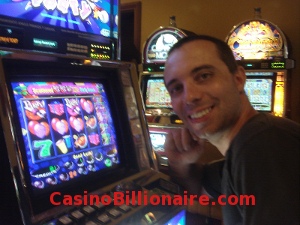 I was playing some of the best slot games by WMS at Conrad Casino Punta del Este as in online casinos these games are only available for UK players.

In the NOGARO CASINO I played some good slot machines from the best operators IGT and WMS that can also be played in online casinos.

We spent most of our time playing at Conrad Casino.

I started playing the famous WMS slot machine SUPER JACKPOT PARTY that is very funny with cool graphics and sounds. I pull some times and then moved to another cool slot machine called BRAZILIAN BEAUTY (also by WMS) and started to pull. 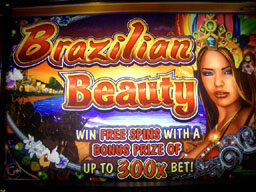 After some minutes playing at BRAZILIAN BEAUTY video slot I've got the bonus round with 20 free spins and then started to build my bankroll for this gambling night. I won enough free casino credits in the free spins and decided to find another video slot to play.

ALIEN video slot (by IGT) - Alien video slot is a 5 Reels, 20 PayLine, 500 Credits maximum bet and a payback of 90% - 95%. It seams the big luck was with my wife that got the round bonus (Alien Egg) in the very first pull ! So, after the extra credits won with Brazilian Beauty (WMS) we had the chance to explode the winnings with choosing the right Alien Egg. She chose the right ones and we got much more casino credits in our account.

We keep playing some minutes and run to the next one... that was definitely our lucky night on casinos and the game Alien Video Slot by IGT help us to increase our credits during bonus round won in the first pull

We found POPPIT video slot (Bally's) on our search and we decided to play some pulls in this funny slot game. I think this game was released in 2005, not sure... we played only 1 line just for know more about the game and my wife got all green ballons lined. More credits in our account.
Our night at Conrad Casino Punta del Este was very funny... the casino offers many options for all kind of gamblers.

Some modern slot machines are always crowded at Conrad Casino Punta del Este and we tried to play for some time but belive, there's line to play these games.

Goldfish II was one of the favourite vide slot in the casino and it was always crowded. I can't imagine how much money was inserted in that 5 Goldfish II games in a row during the 10 minutes I was watching the gameplay. As soon one gambler left, another one was ready to deposit and play. Goldfish II (by WMS) is undoubtedly one of the most played slot game.
Check the slot game GOLDFISH at Jackpot Party (UK players only) 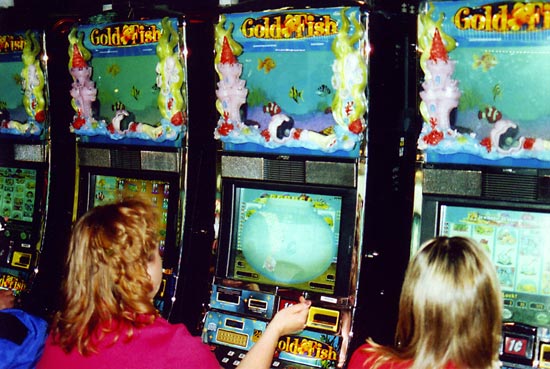 Sex and the City slots game is another crowded game (I don't need to say mostly by women). She was sitting there pulling this fantastic and expensive slot game and I can say this game is the biggest hit for IGT last year... in Las Vegas it was a huge success so in another casinos is not different.
In the Sex and the City slots game you can play 4 slot games in just 1 slot machine and you will need to bet the minimum of $0.50 to play all the lines in one game... and to play all 4 slot games at the same time you will need to bet $2 per spin.
In this kind of game, you will need a budget of at least $200 to increase your chances of winnings and play enough time to get something back, otherwise your money will disapear.

Well there are thousands of topics and casino games to be reviewed here. Punta del Este casinos could not be that huge casinos found in Vegas but they offer good games option and everything any gambler should need (from the low to the high rollers).